A group of residents and students' organizations, on Friday, took out a massive candlelight march in Howly in Assam's Barpeta district, the hometown of a 19-year-old nursing student in Bengaluru who was allegedly murdered in the city on Wednesday. The march, which was organized on Friday night after her funeral in Howly, was attended by hundreds of people seeking justice in the death of the student from Howly, Barpeta. 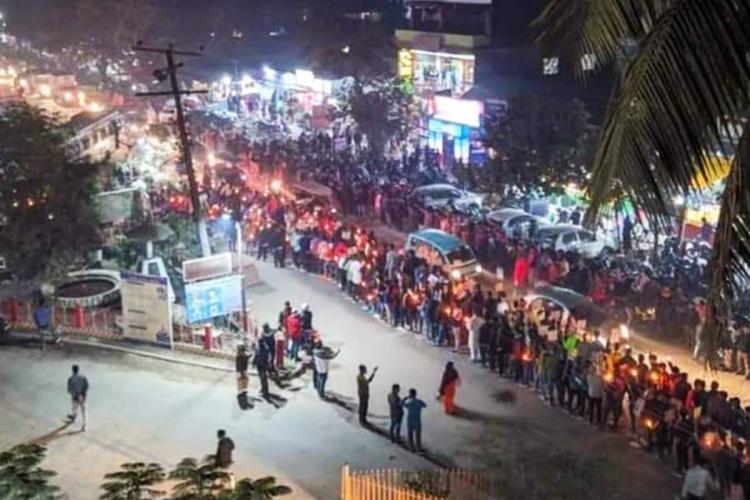 People in the victim’s home district in Assam want the police in Bengaluru to conduct a thorough investigation into the incident. She was found dead in the residence of Anisur Rahman, a 21-year-old paramedical student who also hails from Assam. Anisur was arrested by the Bengaluru police on charges of rape and murder on Wednesday.  “

Anisur, however alleges that the victim was his girlfriend and that she started bleeding and fell unconscious when they were having sex.

Police in Bengaluru have registered a case under section 376(rape) and 302(murder) of the IPC on basis of the FIR filed by the landlord.

The post-mortem is being conducted in Bengaluru's Victoria Hospital and a source in the hospital said that the delay in the report is because the hospital is short-staffed due to examinations for post-graduate medical students. The source added that there were no signs of struggle found on the victim's body and that the report should be out on Monday.

"I request the Karnataka government to take all the necessary action against the culprit and urge you to arrest all culprits as soon as possible. I request the government of Karnataka to take necessary action for the safety and security of all the other students and working professionals from Assam residing temporarily in the state," of Congress wrote to Karnataka Chief Minister BS Yediyurappa asking for a thorough investigation in the case and for justice to be expedited.